Bitcoin’s relation to altcoins is worth monitoring

Log on to any financial website this week and you were inundated with Bitcoin everywhere you clicked. The enigmatic cryptocurrency captured the hearts and minds of Wall Street’s digital community by crossing the vaunted $20,000 level last Wednesday. But it wasn’t done; BTC finally lost steam just south of 23,000 on Thursday, setting the “Twitterverse” on fire in the process as crypto bulls crawled out of the woodwork to clamor “I told you so!”

This could only be the beginning; on Thursday night, cryptocurrency brokerage Coinbase filed a draft registration statement with the Securities and Exchange Commission, indicating an eventual initial public offering is coming. It’s important never to equate Twitter with real life, but in Bitcoin’s case, the buzz seems to be palpable to say the least, so its historic week should be put under the microscope before proceeding.

The trick to Bitcoin is that it’s difficult to analyze fundamentals given its complexity and archaic nature, so technicals seem to rule the space. Two stand out in correlation to its price action; Fibonacci levels and the 20-week moving average. The latter acts as a major support level in a bullish trend and resistance in a bearish trend. As you can see from the chart below, courtesy of Schaeffer’s Senior Market Strategist Matthew Timpane, it also is a major pivot point when price crosses over, often associated with a big move that week or the following week. 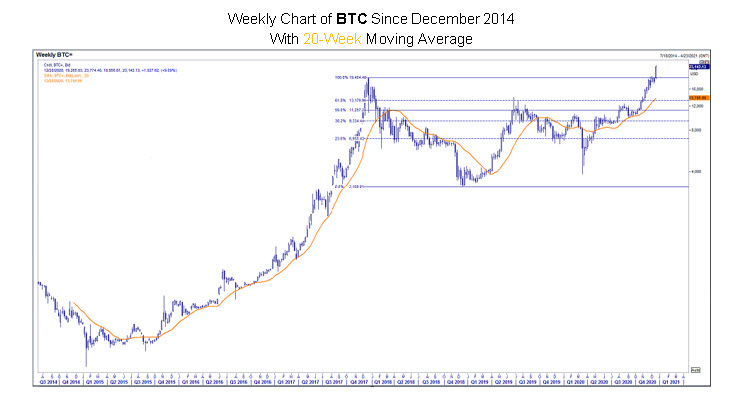 Will BTC take a breather and pull back to that 20-week moving average? One thing to keep in mind; bitcoin’s own physical supply is limited, and we’re now seeing some large players entering the space. Scarcity is the name of the game right now, so it’s unclear if this pullback is imminent or further down the road. If anything, that trendline doesn’t suggest buying or selling, and instead perhaps just prudently watching. The chart below is also equipped with the Fibonacci retracements. It’s stretched in the short run, but if this holds the 100% retracement level, be prepared for Bitcoin bulls to be targeting 30k, which would be a 161.8% fib level retracement next.

What cannot be neglected is the push into other “alternative” cryptocurrencies, the most notable being Ethereum. In the past, dramatic rises from BTC often correlated to money similarly going into “alt coins.” It’s already happening to ETH, per the chart below. The ETH/BTC currency ratio looks to be a potential buy-the-dip rotational situation inside a large two-year basing pattern that has now put in a series of higher lows.

There are other ratios to keep in mind. Bitcoin’s relationship with the dollar –per the final chart below — has been tossed around in this space before, and the argument remains the same; if BTC is being used to offset the dollar depreciation, it’s a good argument for why BTC can still go higher as the Federal Reserve continues to print money and inflation expectations continue rise.

Investor optimism is reaching euphoric levels as 2020 nears its end. A weekly survey from the American Association of Individual Investors (AAII) shows 43.4% have a favorable view of the stock market’s direction in the next six months, the highest the ratio since 2018. Between a forthcoming vaccine and a new administration, there are dangers in succumbing to the frothy optimism that permeates markets right now, especially with Bitcoin. Whatever the prognosis of Bitcoin, it’s critically important to not get swept up in the social media craze BTC has created, and instead always frame its ascent with the technicals such as above. 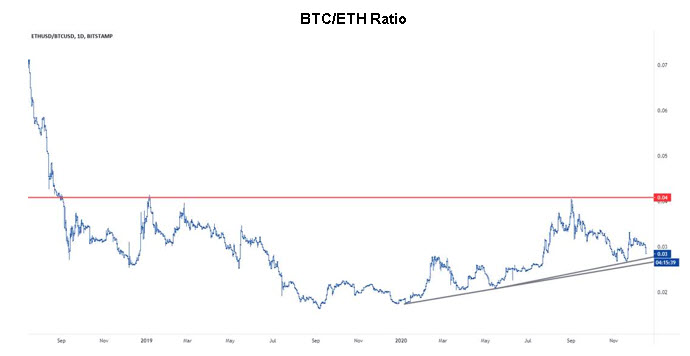 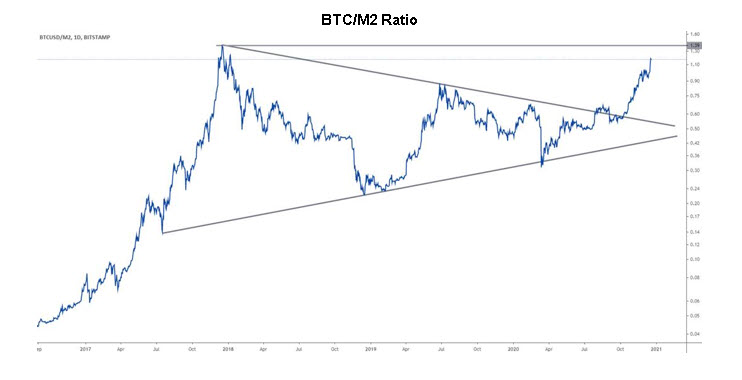 Subscribers to Bernie Schaeffer’s Chart of the Week received this commentary on Sunday, December 20.