Three of the most important protocols on Ethereum’s DeFi have shown strong signs of recovery in the last 24 hours. Accumulating a total gain of nearly 25% in the last 24 hours, Aave (LEND) records an increase of 11.99%, Maker (MKR) an increase of 8.74%, and Yearn Finance (YFI) a 4.08%. The rise in the above protocols coincides with an increase in Ethereum’s price which, at the time of publication, stands at $365 with a gain of 3.2%.

Reasons behind rally of Aave, Maker and Yearn Finance

In addition to an increase in the price of the main cryptocurrencies, led by Bitcoin and Ethereum, the referred protocols are in a moment of important announcements and updates. Thus, Yearn Finance team has announced the launch of one of its most anticipated products, Yearn v2 Vaults. The new product will include new vaults and strategies that liquidity providers will be able to leverage to use as collateral and take out loans. What is innovative about Yearn V2 Vaults is its automated process with “pooling strategies”.

Among the benefits offered by Yearn’s vaults are savings on gas fees as well as an automated and secure system designed to rebalance rather than liquidate positions. In addition, user earnings are automatically optimized by the vault. This way, Yearn Finance maintains the appeal that has made it popular amongst investors.

On the other hand, Maker has made an update to bring the price of its stablecoin DAI closer to one dollar. Therefore, as researcher Jack Purdy explained, the stablecoin has seen an increase in demand. DAI is one of the preferred options for investors to use as collateral, Purdy stated:

This comes as $400 million in USDC has been added as part of a concerted effort by governance to help restore the peg that has struggled to hold with demand for Dai increasing with every new yield farm.

Also, Maker’s team has announced yesterday that Loopring (LRC), Compound (COMP) and Chainlink (LINK) are now available in the protocol’s vaults to use as collaterals. This series of announcements have been translated into an increase in the platform’s total value locked over the past 30 days. Data from DeFi Pulse shows that in the last 30 days, the protocol has increased its TVL to $1.92 billion, at the time of publication. 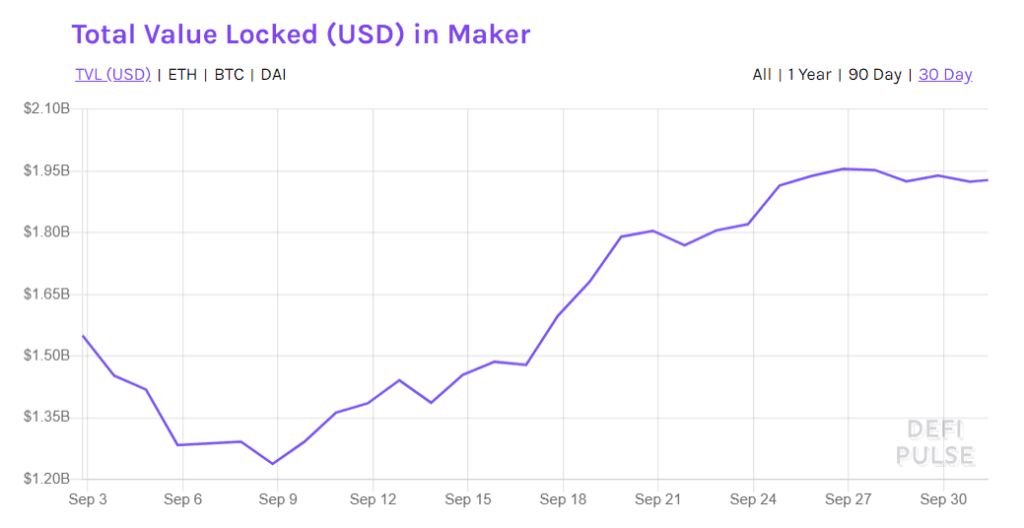 Finally, loan protocol Aave has concluded the voting process that was intended to approve or reject the activation of its new governance model. The Aave team has notified that the LEND token will be migrated to AAVE, as part of the process. The affirmative votes were, according to the protocol team, “overwhelming”. The proposal was approved with 100% of the votes. The Aave team is expected to make further announcements on Friday, October 2nd.

Thus, The DeFi sector seems to be regaining its momentum and with an ATH in TVL of $11.15 billion, the trend seems to be bullish.