With Bitcoin and Ether setting new all-time highs, analysts are shifting their attention to the altcoin market in anticipation of a rally.

This guide is sponsored by CoinSpot. The easy way to buy Bitcoin and 230+ other digital currencies. Free instant deposits via Osko, PayID or POLI plus features like ISO27001-certified security, recurring buys, stop loss orders and a new mobile app. Learn more.

After setting a new all-time high (ATH) of $20,000 in late 2017, Bitcoin’s share of the cryptocurrency market slid by over 30% in the month that followed. During that time, Ether, XRP, Litecoin, XLM and a range of altcoins rose to all-time-high prices off the back of the momentum created by Bitcoin.

These sorts of price movements, where the total market share of altcoins diverges from that of Bitcoin, are known colloquially as an “alt season” and are typically expected to follow a Bitcoin bull market.

The idea is that profits from Bitcoin are taken and transferred into the more speculative and risky altcoin market. Thanks to the increased value of Bitcoin, the amount of liquidity available to flow into altcoins is much higher than during normal market conditions, and thus the price of some altcoins rises considerably as new capital flows into the market.

And now, nearly three years to the day, the cycle looks set to repeat itself. 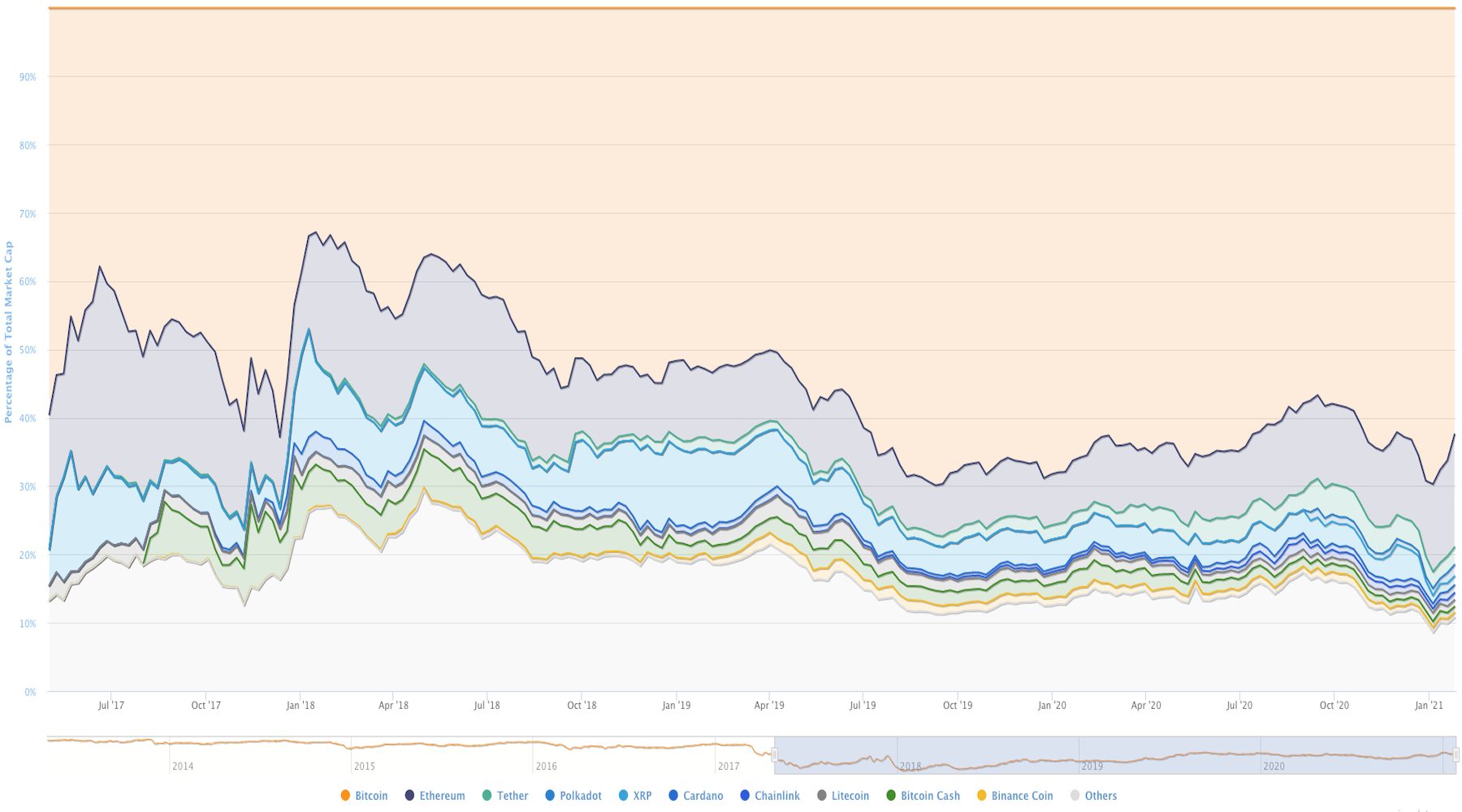 Following a new all-time high above $40,000, Bitcoin’s market dominance has begun to slide, losing 8% in the past month. All the while, the total market cap of cryptocurrencies excluding Bitcoin, rose by 40% from US$265 billion to $370 billion in only a week. Add to that a new ATH price for Ether, and history suggests that an alt season might be around the corner.

Has alt season started yet?

Historically, one of the popular indicators of an impending alt season has been the relationship between Bitcoin and Ether, with ETH seen as a proxy for the wider altcoin market.

Currently, the price of Ether is the strongest it’s been against Bitcoin in two years, having just set a new all-time high above $1,450, with $1,600 in sight as the next milestone. Ethereum is also outpacing Bitcoin in terms of usage, with 28% more transactions settled daily, largely thanks to Ethereum’s unparalleled token ecosystem.

Imagine not being bullish $ETH. pic.twitter.com/3NfOz1ruiM

Market analyst Omkar Godbole has looked to the recent divergence between the two assets in futures markets as a more nuanced indicator of an altcoin rally. He notes that the implied volatility (IV) between Bitcoin and Ether has risen to a record high of 46%, saying that:

“The widening of the IV spreads indicates the market expects ether and other alternative coins to chart bigger percentage moves than Bitcoin in the near term.”

Looking beyond the BTC-ETH relationship, we can judge the health of the altcoin market with simple tools like the Altcoin Season Index, which tracks the performance of the top 50 coins by market cap (excluding stablecoins and pegged tokens).

If 75% of coins outperform Bitcoin for a given time period, then it is judged to be a definitive alt season. At the time of writing, the 90-day index was right on the line at 50, while the monthly indicator is trending toward alt season at 65.

This trend should be no surprise to anyone who has had their eyes on the market recently. When Bitcoin dropped 13% from $34,347 to $29,000 on 4 January, altcoins rallied simultaneously, indicating that money was flowing out of Bitcoin into alts, rather than out of the market entirely.

Furthermore, while Bitcoin has retraced from its all-time high of $40,000 down to the lower $30,000 region, the rest of the market has refused to follow in any considerable way. At Bitcoin’s peak around $42,000 on 9 January, the size of the altcoin market was $320 million. While BTC crashed by nearly 30% over the following two weeks the altcoin market barely moved, only falling 6.25% over the same time period.

In fact at $350 million at the time of writing, the overall market cap of altcoins is larger than it was when Bitcoin set its ATH, suggesting a decoupling of the two markets.

So with a range of indicators pointing towards an altcoin season ahead, which types of tokens do analysts have their eyes on for 2021?

Much like 2020, DeFi looks to be the industry of major focus in 2021. This is no surprise, given the way the industry proved itself in 2020 as being able to provide legitimate financial infrastructure with legacy and novel products in a decentralised manner.

That is to say, a new global financial system built on blockchain technology looks like a very real possibility.

As cryptocurrency analytics firm Messari states in its 134-page Crypto Theses for 2021 report, “It takes a helluva lot of work to go from today’s FDIC-insured financial system and etrade accounts to a crypto equivalent. Yet over the course of this year, crypto spawned the building blocks to do just that.”

Author Ryan Selksis goes on to identify some of the key products enabling the ongoing proliferation of DeFi:

This thesis – of being long on DeFi – is supported by VC firm Blockchain Capital, which allocated 3 of its 10 “bold predictions” in its end of year report to a growing DeFi market, in particular that “loans in DeFi protocols will scale up by 10x, the market cap of DeFi the top 3 governance tokens will double, and that decentralised exchanges will account for one-third of all spot trading in 2021.”

Uniswap alone – which allows users to create customised trading pairs and markets – has already handled several days of $1 billion of trade volume in recent weeks and as much as $16 billion in December, placing it in the top 15 exchanges by volume according to CoinGecko data, beating out many centralised competitors.

Despite this collective surge, the top 9 DEXs only account for 5-10% of the overall market, so there is still plenty of room for growth. 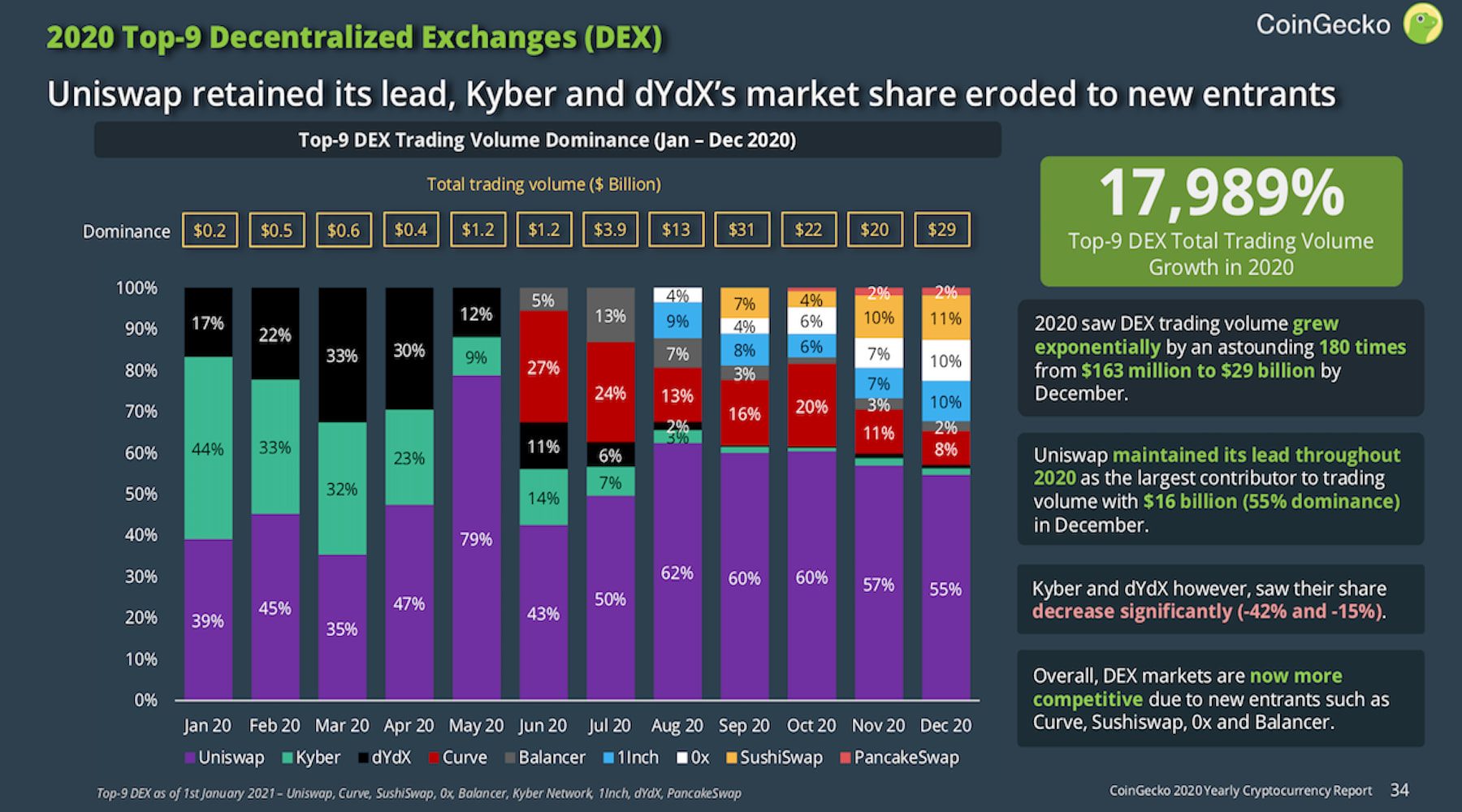 If DeFi is the engine carrying the train, then base-layer protocols are the rails on which it flies along.

Base-layer protocols refers to the networks that provide the infrastructure for larger blockchain ecosystems – think Ethereum, Polkadot, EOS, Tezos, Cosmos, etc. These are like operating systems which host tokens, dApps and smart contracts. The associated token of each is then used for a range of purposes depending on the protocol – from paying gas fees, to staking, to voting on protocol changes.

With ETH 2.0 still being a while away, analysts like Igor Igamberdiev from The Block are looking towards other protocols like Polkadot and Cosmos which are set to open up their token economies and inter-blockchain communication in 2021.

Ryan Selksis of Messari also posits that the similarities between Polkadot and Cosmos spoke-and-hub models of scaling look a lot like ETH 2.0 – except that the former are already live, while a full ETH 2.0 rollout is still a few years off. As such, competing base-layer protocols may steal some of Ethereum’s lunch, with Selksis saying

“The opening for competitors to beg, borrow, and steal Ethereum users is now, in the early phases of the eth2 network upgrade, while gas costs on eth1 are outrageously high for certain apps.” 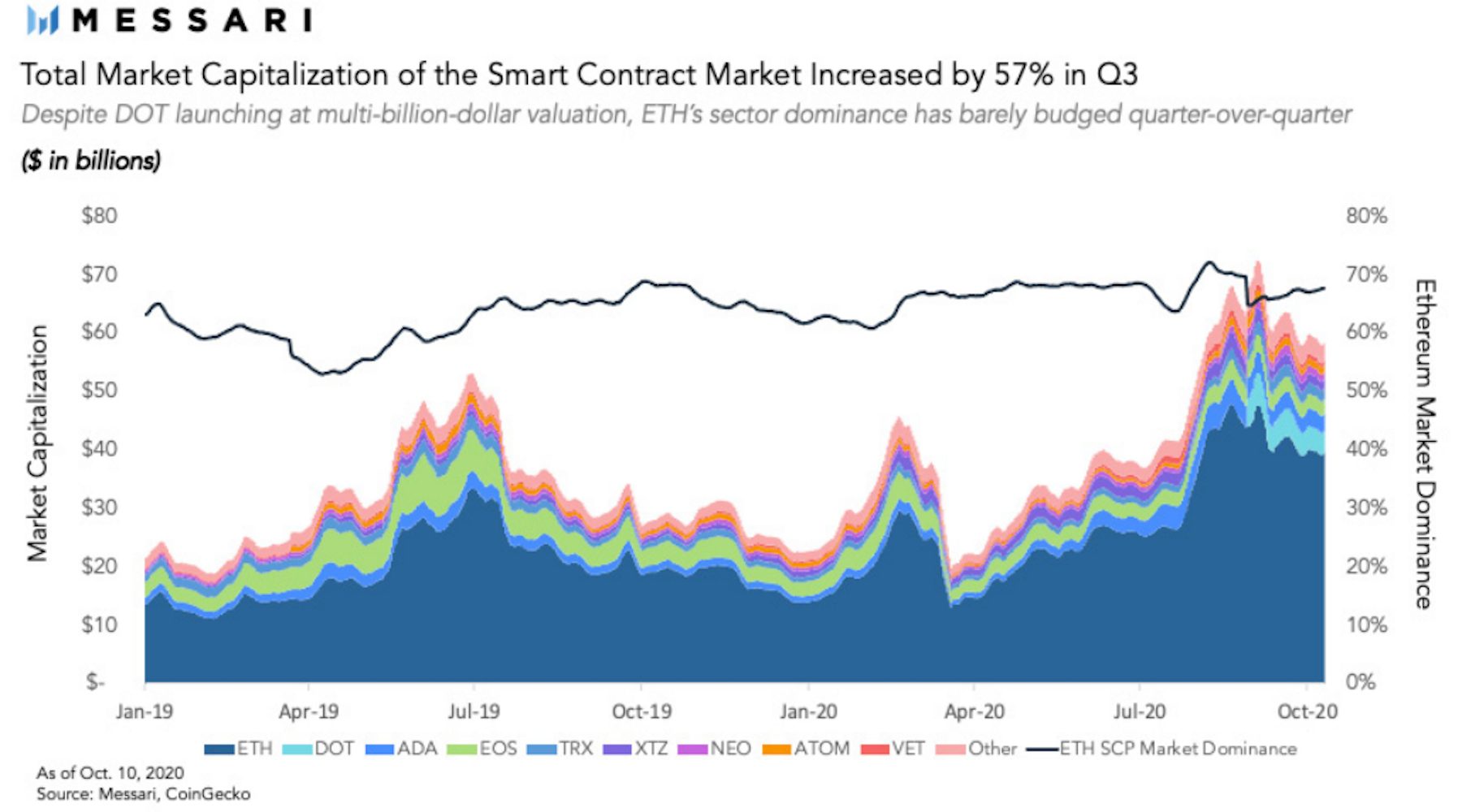 In defense of its position, Ethereum (or rather its dedicated community) has developed a range of interim scaling solutions known as Layer 2 technologies, which run on top of Ethereum (Layer 1). They aim to speed up transaction times, reduce gas fees and generally make things more efficient until ETH 2.0 is fully rolled out. These technologies are expected to be a major focus in 2021.

The catch here is that there are quite a few of them, and they don’t necessarily interoperate. Meaning that dApp developers on Ethereum will have to make a choice between available Layer 2 technologies, undoubtedly leading to a scenario with winners and losers.

Although it can be challenging and risky to navigate, history and current price action make it clear that some of the most lucrative opportunities in cryptocurrency are found beyond Bitcoin.

Disclaimer:
This information should not be interpreted as an endorsement of cryptocurrency or any specific provider,
service or offering. It is not a recommendation to trade. Cryptocurrencies are speculative, complex and
involve significant risks – they are highly volatile and sensitive to secondary activity. Performance
is unpredictable and past performance is no guarantee of future performance. Consider your own
circumstances, and obtain your own advice, before relying on this information. You should also verify
the nature of any product or service (including its legal status and relevant regulatory requirements)
and consult the relevant Regulators’ websites before making any decision. Finder, or the author, may
have holdings in the cryptocurrencies discussed.

Disclosure: The author holds a range of cryptocurrencies at the time of writing