Bitcoin’s price has broken all psychological and real barriers to cross its previous ATH of $19666 on Bitstamp and 19,799 on Binance. Earlier today, the cryptocurrency’s price crossed $19,000 again after it did so a few days ago too before corrections set in. At the time, BTC had crossed the $19,000-mark for the first time since December 2017. One of the top reasons for the same is the supply shortage. The ATH across various exchanges differs; take Coinbase, the ATH was 19,892, while Gemini’s ATH was 19,999, and Binance’s ATH was 19,799.

Since the beginning of 2020, the supply shortage narrative has built up and reserves on spot exchanges continued dropping recently. It has recovered from the lowest point of 2.363 Million based on data from CryptoQuant.com and despite an increase in exchange BTC reserves, whales haven’t withdrawn BTC in significant numbers from exchanges. 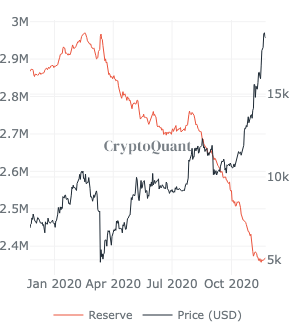 Another key driver of the current price rally is the whale accumulation and unspent Bitcoins. Institutions like Grayscale continued buying Bitcoin systematically even above the $18000 level and now the mainstream media is discussing how PayPal, the payment giant is buying Bitcoin. Whales with balances above 10k Bitcoins HODLed through the price rally to push the price to the current level. The below chart from Whalemaps shows the unspent Bitcoins from the past 24 hours.

The dwindling supply on exchanges and increasing demand helped build key momentum needed to push through previous ATH and climb to a new ATH, 6 months post the third halving. Trade volume on spot exchanges increased consistently throughout November 2020 and it shows the momentum of the current bull run. 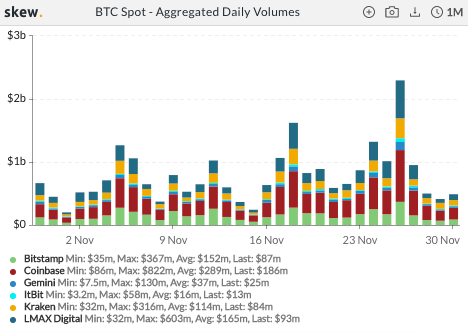 “No one can predict how far a rally can go, so short-term speculation is very risky. However, there is one smart investment strategy: cost averaging for the long term. Buy small amounts of bitcoin daily or weekly, hold it long-term through the ups and downs, and stick to your buying plan for years, not months. It’s like a SIP for bitcoin. No one knows how far this rally will go but at some point, there is always a correction. Anyone who pretends to know more than this is fooling himself or others. Long-term prediction is easy, though. Bitcoin will continue to go up (with periodic corrections) and could easily hit 1 crore by 2030, as our CEO has predicted. Investors should plan in years, not weeks.”

Though institutional investors and family offices are taking a keen interest in Bitcoin in 2020, there is no assurance of enough momentum to hit the prediction of top on-chain analysts like Plan B.