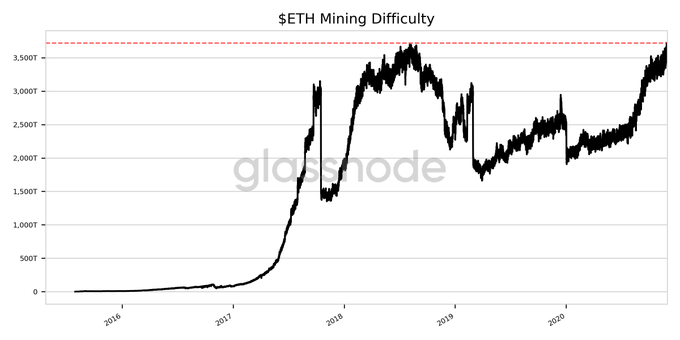 This all-time high was registered on the heels of a two-year high marked at 3,650 terahashes on 21 November, as noted by the data provider Glassnode.

The mining difficulty highlighted how hard it is to mine the blocks on the Ethereum blockchain and is also associated with processing transactions. The coin’s mining difficulty is determined by the number of active miners in the network and an increase in miners’ computational power, often increases the difficulty. In the current state, it has become more difficult to mine the ETH blocks, despite the efforts of miners.

This could have been a contributing factor to a latency issue encountered by Binance on 26 November. The CEO of Binance, Changpeng Zhao AKA CZ, noted:

“Minor issue 1, ETH network was/is congested. We paused withdrawals for a while due to many rejected/ “stuck” tx. Now all resumed again.”

The difficulty reaching its peak could have contributed to such an issue.

Ethereum’s mining difficulty has been on a rise since the beginning of the year, however, the decentralized Finance [DeFi] hype in August caused it to surge even more. The interest received by the DeFi platform resulted in rising activity on the network, thus, causing a rise in the difficulty.

Although the previous drivers were price and DeFi, the current rise in mining difficulty has been despite the falling price. Even though the price was higher compared to what was observed last year, the peak was noted at $623. Ethereum is approaching its phase 0 launch soon and the market activity will determine, whether the difficulty will form a new high or witness any change.