Climate change is here in Indiana and its effects are growing stronger, Purdue researchers say. We can expect more flooding in spring and drought conditions in summer, among other changes.

When Aaron Rickleff heard the town of Rocky Ripple had approved a floodwall that would pass just feet from the house he had spent thousands of dollars lovingly renovating — the house he described as his family’s haven — he and his wife cried.

Then, they decided to move.

Rickleff is one of the Rocky Ripple residents worried that a proposed $66 million floodwall set to be constructed in the next few years could change the town’s identity and price some out of their homes.

But the project is crucial, city officials and local advocates say, to protecting the quaint town of 600 from a flood that would put many of their homes underwater, some by as deep as 10 feet.

These floods are expected to be more common in Indiana as climate change progresses. Rocky Ripple, which encompasses just more than 300 homes, faces a problem that thousands of communities across the state will also be forced to confront in the coming decades.

The project would be paid for by future increases in property taxes. But Rocky Ripple is not an especially wealthy neighborhood — the median household income is around $57,000 — and some question whether it’s realistic to expect a couple hundred families to pay the bill.

Aware of the residents’ concerns about the cost, city officials are pursuing a federal grant worth tens of millions of dollars. If that grant doesn’t work out, they have said they would be open to pursuing more.

City officials also point out that a floodwall removes the requirement for federal flood insurance and opens the door for development, which has been limited in the town for decades because of the community’s flood-prone status.

New construction could help bring in additional property tax revenue to help pay for the floodwall, but some fear it would also make the cozy hamlet busier and more expensive.

“It’s just a matter of time before it turns into another Meridian-Kessler,” Rickleff said. “I’m a general contractor, I buy and sell houses for a living. I know exactly how it works.”

That said, by most accounts, the majority of residents in Rocky Ripple support the floodwall. And leaving Rocky Ripple unprotected is not an option, many say, as a flood could endanger not only property, but people.

“We want it to be safe,” said Mandy Redmond, a Rocky Ripple resident of 34 years and president of the town council. “And we don’t want people to lose their homes. And that’s what would happen if we had a flood right now.”

Decades in the making

Nobody in Rocky Ripple can remember a flood ever breaching the earthen levee that currently surrounds its 190 acres. Even so, talk of a floodwall has been around for decades.

It got close to flooding in 1990, when the river rose to 15 feet, and again in 2005 when it reached 14 feet. Any level higher than 17 feet would cause a flood, but it hasn’t breached that height since 1913, IndyStar previously reported.

That said, most homes in Rocky Ripple are at high risk of flooding in the coming decades, the city says.

Flooding: 113,000 more properties may be at risk of flooding in Indiana than previously thought, report says

Flood Factor, a tool from nonprofit First Street Foundation that calculates properties’ flood risk, puts almost all properties in the community at severe or extreme risk of flooding. The tool predicts these houses have a 99% chance of being flooded in the next 20 or 30 years.

These are just a handful of the thousands of properties likely in a floodplain in Marion County, according to a First Street Report released earlier this year that found FEMA maps may be underestimating the number of structures at risk.

In the 1990s, the town of Rocky Ripple chose not to participate in a floodwall project that would protect their town, in part because the proposal from the U.S. Army Corps of Engineers would have required some homes along the water to be purchased and removed.

That project, which spans Westfield Boulevard to Butler University and Capitol Avenue, was completed last year. 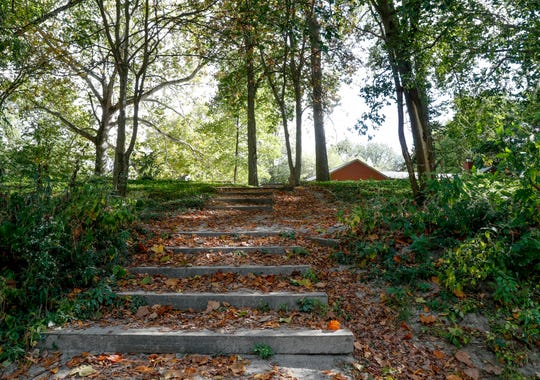 The ball didn’t get rolling on a separate, local floodwall for Rocky Ripple until around five years ago, said the city’s stormwater project manager Michael Massonne.

After reviewing a few designs, the town settled on a wall comprised of earthen levee where space allows for it, and physical walls where space is tight. The project will protect the town from a 100-year flood, or a flood that has a 1% chance of occurring in any year.

“I’ve heard residents say, well, we’re not against flood protection, we just want to make sure we get the kind of flood protection that we want. And that’s tricky when you’re working as close as we are to the residences, and the river,” Massonne said. “We felt really good about that (plan), because we were able to come up with a feasible alternative we believe did not result in immediate removal or destruction of any property.”

To pay for the project, the city offered a unique path called a flood control improvement district.

Operating somewhat like a tax increment finance, or TIF, district, a flood control district allows the city to pay for the $66 million project, under the promise that the town of Rocky Ripple would reimburse the city through any increases in property taxes.

It’s not a new tax, Massonne emphasizes. But as property value increases, boosted by the fact that homes will be mapped out of a flood zone, property tax collections would rise as well.

Floods: Is your home at risk? In these ZIP codes the risk may be greater than thought

The flood insurance requirement would be removed when the homes were mapped out of a flood risk by the Federal Emergency Management Agency. But, as FEMA maps are notoriously outdated, this process can take years.

In acknowledgment of residents’ concerns about the cost, Massonne said the federal grant the city is applying for could bring in tens of millions for the project. They should know whether they received the grant within a year. If that grant doesn’t pan out, he said they would be open to pursuing more financial assistance.

Butler University has promised to commit more than $3 million to the project, in recognition that although the university is not a part of the flood control district, the wall would open up 75 acres of its land for development. 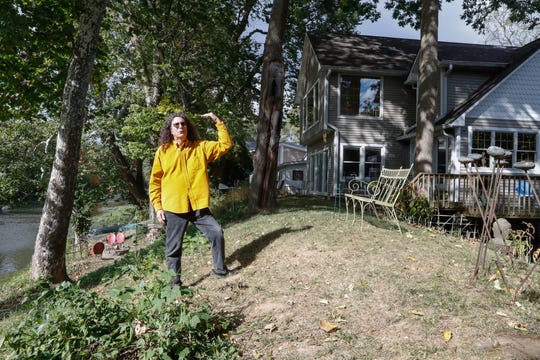 Rocky Ripple neighborhood homeowner Daniel Axler stands on the White River earth levy, demonstrating the height of a proposed flood wall which would sit atop the levy blocking his access and view of the river in Indianapolis, Wednesday, Sept. 30, 2020.  (Photo: Michelle Pemberton/IndyStar)

The university has no intention of developing that land anytime soon, said Michael Kaltenmark, Butler’s director of external relations. But it could be helpful in the distant future if the school needs to expand.

Earlier this year, the city hired engineering company AECOM to perform hydrological surveys and finalize details needed for the wall.

Massonne said they’ve proposed to start designing the project next year and start construction in 2022.

‘It was our TV every night’

Once a small fishing village for Indianapolis residents to get away from the city, the town of Rocky Ripple has long been a natural haven.

Just past the Butler campus, nestled in a triangular piece of land between an oxbow of the White River and the central canal, the town at first glance appears to be mostly trees.

That’s why Rickleff moved there.

He and his wife loved their house and its access to the White River. A former environmental advocate, Rickleff said the river “filled them up” at the end of each night.

“Every evening, we had a fire pit on the levee … we sat out there 300 nights a year by a fire,” Rickleff said. “It was our TV every night. We’d see herons and bald eagles and geese … Across the river, beavers, muskrats. You just see everything.”

Emrichsville Dam: Citizens Energy decides on Riverside Park for rock ramp that will replace it

The approved floodwall project would likely put a wall right behind Rickleff’s back door — blocking the view of the river, but also bringing down trees and putting up a border from the wildlife. Rickleff, who spends much of his time kayaking, rafting and enjoying nature along the White River, said he would rather have seen the house torn down than a wall built around it.

Dan Axler is also bracing for his home to drastically change. His house is in the corner of the flood control district, meaning he’ll have a wall several feet tall bordering his back door and the right side of his yard.

The wall will cut him off from his neighbor, who he visits often. In between their houses lies the remnants of a home where his wife once lived, affectionately called the grotto. What’s left of it has been filled with sculpture, art and a fish pond. When built, the floodwall will run right through it. 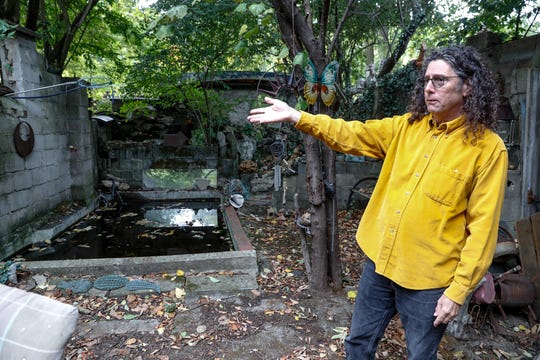 Rocky Ripple neighborhood homeowner Daniel Axler describes how a proposed flood wall to be built atop the current earthen levy would turn after his home, go through the foundation of a previous home, lovingly referred to by he and his neighbors as the “grotto,” in Indianapolis, Wednesday, Sept. 30, 2020. Axler’s wife grew up in the home, which once stood in the grotto before it later burned down. Axler and some other neighbors could loose backyard access, and their view of the river if the proposed flood wall is built.  (Photo: Michelle Pemberton/IndyStar)

Axler is planning on raising his back deck so that he can still look out at the White River at night. But he would much rather keep his access, and his trees.

“Here in Rocky Ripple, whose residents always enjoyed the river and loved the river, we’re suddenly going to get walled off,” Axler said. “It’s kind of painful.”

‘I just see us being protected’

For Mandy Redmond, it’s not about changing the neighborhood — it’s about preserving it. She’s lived in Rocky Ripple for 34 years, and she wants to keep living there.

“There are residents in our community that are concerned that this is going to change the character of our community, but I don’t see that happening,” Redmond said. “I just see us being protected, and continuing to shape our future.”

The Scrub Hub: Your questions. Our answers.

Do you have questions about the environment? IndyStar environmental reporters Sarah Bowman and London Gibson want to hear from you.

A flood, she fears, would be devastating. Massonne said much of the town, with the exception of a handful of homes, would be inundated in the case of a flood.

FloodFactor’s analysis predicts a 20% chance that Rocky Ripple could be flooded with 0.9 feet of water within a year. There’s a 5% chance the flooding would reach higher than 3 feet, which they say could damage a house’s floors, walls, plumbing and infrastructure.

For Rickleff, you acknowledge the risk in order to live in a community like Rocky Ripple: peaceful, natural, unchanging. Flood insurance — and the threat of rising water — is the price you agree to, he said.

He’s moved now, a few miles north of Rocky Ripple, but said he would move back in a heartbeat if the floodwall project was scrapped.

His new house is also on the White River, in a floodplain.

Connect with IndyStar’s environmental reporters: Join The Scrub on Facebook.

IndyStar’s environmental reporting project is made possible through the generous support of the nonprofit Nina Mason Pulliam Charitable Trust.