As speculation intensifies about the Indian government planning a blanket ban on virtual currencies, the burgeoning cryptocurrency industry in India has a herculean task in its hands. To convince the current political dispensation to shed its paranoia about cryptocurrency’s nefarious use cases, and instead, weigh the technology’s pros and cons for the Indian economy before arriving at a decision.

The fact that cryptocurrencies have, in the past, due to their decentralised nature and the lack of a governmental overseer, been proved to be a tool for terror financing and other anti-social activities, has been a common refrain of successive governments for not issuing a policy framework for cryptocurrencies. The Financial Action Task Force (FATF) an inter-governmental organisation to combat money laundering, has also confirmed these fears associated with cryptocurrency’s use cases, noting that the anonymous nature of cryptocurrency transactions has fuelled terror activities the world over.

However, Sagar Sarbhai, the head of regulatory relations at Ripple, a global payments company that utilises blockchain technology, highlights an important point of concern that is usually missed when explaining the suspicions associated with cryptocurrency. “The FATF has also said that the more you push these technologies in a policy vacuum, the more nefarious use cases will emerge. The FATF has advised all countries to issue a licensing framework for crypto exchanges,” says Sagar.

“The concerns are completely valid, but a ban can never be the solution for emergent technologies which can bring so much good to our country,” adds Sagar.

“Compare blockchain technology to the internet, which also has several dangerous use cases. But do we ban the internet, or do we focus on increasing awareness about its nefarious use cases and ensure that the internet is used only for clean purposes,” asks Navin Gupta, managing director for South Asia and MENA region for Ripple, also talking about the positive use cases of cryptocurrency.

Crypto’s Positive Use Cases For India

The Indian diaspora, at 17.5 Mn, is the largest in the world, according to the United Nations (UN) International Migrant Stock Report 2019. Owing to its humongous overseas population, in 2018, India was the highest recipient of foreign remittances at $79 Bn. India also sends around $18.75 Bn every year for education, healthcare and other various purposes.

Remittances are expensive when sent through traditional channels because to enable cross-border remittances, overseas banks have to keep a large amount of cash in other markets, estimated to be around $5-10 Tn. Keeping this amount in other markets brings with it capital costs and depreciation risks.

“On the other hand, cryptocurrency provides us with an enterprise use-case called on-demand liquidity. Through 24/7 crypto exchange platforms, your money in any currency, say US dollars, is converted into XRP (a digital asset), which is then converted into Indian rupees. The whole transaction can be completed in no more than two minutes. Further, one can get live conversion rates at any time of the day on these platforms. There is no need to have working capital stuck in a bank account in India,” says Navin, adding that in large receiving markets such as The Philippines and Mexico, Ripple has witnessed customer savings of up to 60%.

Another India-specific use-case of cryptocurrencies mentioned by Gupta is for businesses which could potentially service overseas customers through online video classes, but haven’t been able to take off because the cost of remittances is too high.

“Think of a Yoga class someone in India might be looking to offer to a customer situated overseas. The trial class could cost $25 but it would possibly take $100 to service the transaction, which is unviable. So remittances below a $5,000 threshold would be unviable when made through traditional channels,” says Navin, adding that hundreds of entrepreneurs and new business ideas are being held back, because of inflated costs of remittances and not allowing new technologies to disrupt the market.

Kumar Gaurav, the founder and CEO of Cashaa, a neo-bank which provides banking services to businesses from the crypto industry, concurs with Navin’s views.

“I feel that India is still skimming the surface of the crypto market. The true potential of the market is yet to be tapped into. In fact, in the last few months, cryptocurrency exchanges have seen a huge number of user registration post the Supreme Court order which quashed the Reserve Bank of India’s (RBI) 2018 circular which had introduced a banking ban on cryptocurrencies,” says Gaurav.

“We are now looking at 50-100 Mn users across the Indian ecosystem. Embracing crypto will help the Indian economy as it will create jobs for India’s agile workforce in the Fintech segment, it will also help in building a robust financial ecosystem which will be beneficial for the end-user, providing actual ownership over the finance of an end-user.”

Most stakeholders in the crypto industry agree on the need for a policy framework for crypto exchanges in India. Ripple executive Sagar Sarbhai outlines some of the salient features which could be adopted in such a regulatory framework for the crypto industry in India. “We need a taxonomy for the different use cases of cryptocurrency, similar to what other countries such as the UK have done. These could be divided into a security token, similar to other securities such as stock or bond, an exchange token, which is decentralised and purely meant for transaction purposes, such as Bitcoin and Ethereum, and a utility token, which will cover virtual currencies within an ecosystem, such as virtual poker chips (fake money) in a mobile poker application,” says Sagar, who has also written a policy paper titled “The Path Forward For Digital Assets Adoption In India”.

Sagar adds that the regulatory framework could have certain requirements placed upon crypto exchanges, relating to capital and cybersecurity, among other things. Only crypto exchanges which fulfil those requirements should be given the license to operate. He suggests that the Securities and Exchange Board of India (SEBI) would be the right body to regulate cryptocurrency in India, adding that initial discussions held by Ripple executives with Indian policymakers have been largely positive, but haven’t yielded any concrete results thus far.

Sagar’s other ideas for exploring a regulatory framework for cryptocurrency in India are more radical.

Since India’s Supreme Court, earlier this year, quashed the RBI’s virtual banking ban on cryptocurrencies, which was imposed in 2018, the crypto trading volume on several exchanges in India has soared. Some like WazirX have witnessed a 400% increase in trading activity during the Covid-19 lockdown. Cashaa, that claims to be the largest liquidity provider for Indian crypto exchanges, claims to have witnessed an 800% spike in trading activity on its network within 48 hours of the Supreme Court order in March.

However, the lack of a regulatory framework and the resultant policy lockdown means that the industry lies in a grey zone, hence unable to realise its full potential. According to Crebaco Global Inc., a credit rating and audit firm for blockchain and crypto companies, India has an immediate potential crypto market size of $12.9 Bn if the sector is regulated. The absence of regulation for the sector has meant that crypto trading volumes in India, though on the rise this year, still comprise a minuscule fraction of the global trading volumes.

The same can be addressed by regularising the sector and helping India accrue the benefits that increased use of cryptocurrency could bring.

“In every decade or two, we have seen a paradigm shift in technology leading to filling up a gap in society, and that today is the case with the crypto industry. We have a trust gap that Blockchain-based currencies are solving. Regulators around the world have already started regulating crypto be it the New York Financial regulator or FCA (Financial Conduct Authority) in London or MAS (Monetary Authority of Singapore),” says Gaurav. 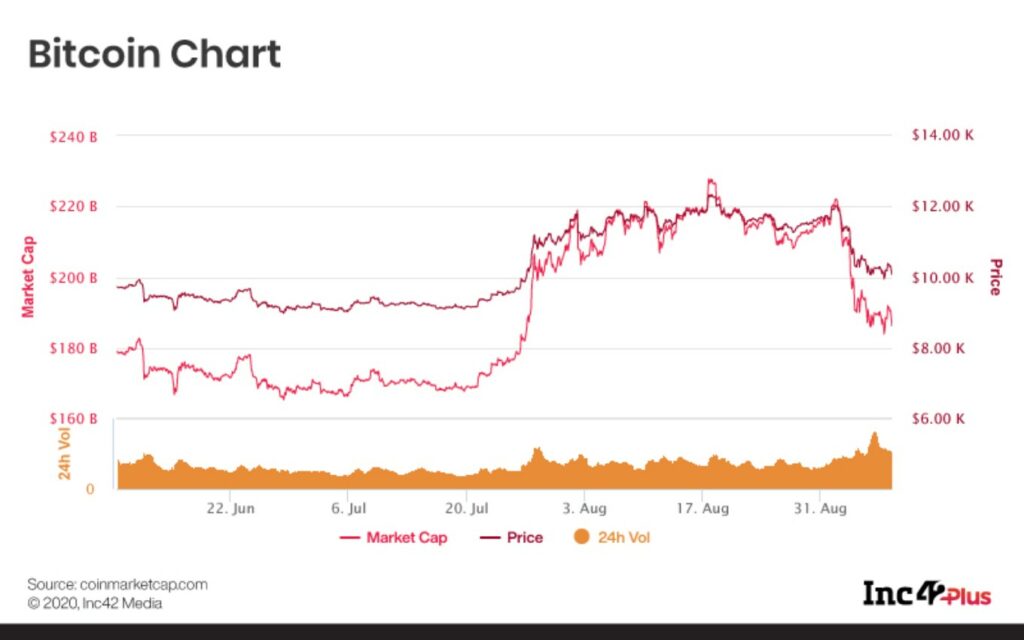 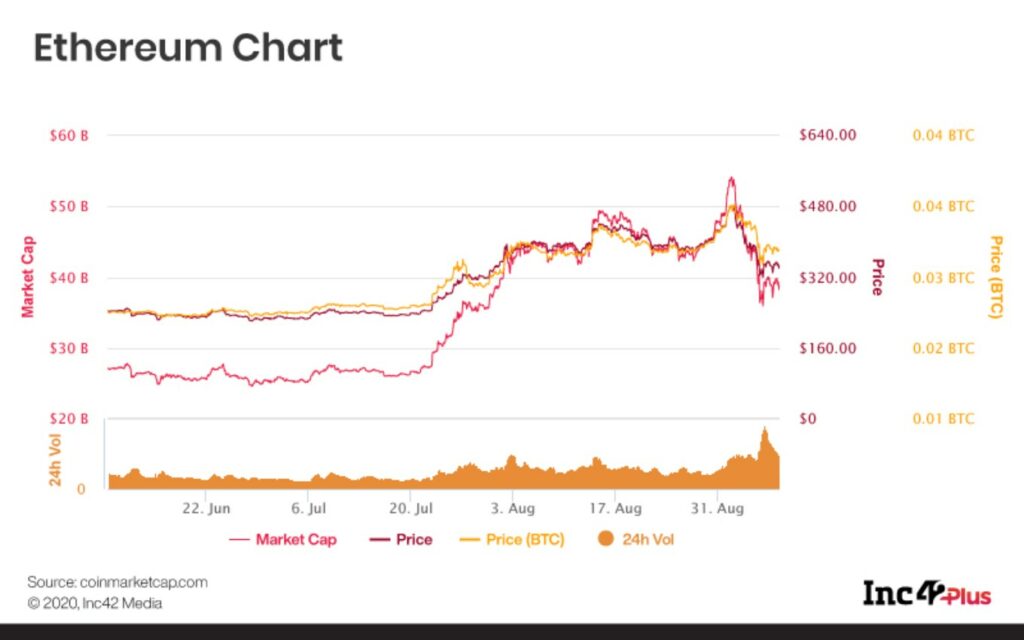 Bitcoin Should Be Regulated Like Stocks in India, Says Think Tank Founder

BEGIN India think-tank founder Deepak Kapoor told BusinessWorld in an interview that India should legitimise Bitcoin, and it should be traded like a stock. “That is the only legal status it can get and it should get this status,” he said. Kapoor was against the idea of Bitcoin being used as a currency. “You make it legal and you might put the entire economy of the country at stake,” he argued, describing Bitcoin as a “private currency”. Nischal Shetty, CEO of Mumbai-based crypto exchange WazirX, opposed the idea of regulating Bitcoin like stocks. “Bitcoin is not a slice of a company that you can buy or invest in. Rather, it is seen as an asset, like gold for example. Hence, it can’t be seen as a stock,” Shetty told CoinDesk. You can read the full story here.

Before March this year, the RBI had placed a banking ban on cryptocurrencies. This meant that India’s banks were banned from processing payments related to cryptocurrency. So users wanting to use their funds in banks to purchase Bitcoin, Ethereum or other virtual currencies, were barred from doing so since banks were barred from providing services to crypto exchange platforms. Peer-to-peer trading was the only way cryptocurrencies could be exchanged. Users also began using stable coins, whose value is tied to a fiat currency such as the US dollar. This makes stable coins more immune to market volatility, as compared to Bitcoin or Ethereum.

“In India, the use of stable coins skyrocketed after the RBI payments ban since exchanges could not accept rupees. For our peer-to-peer customers, stable coins offered the solution of holding cash in the exchange without having the need to withdraw to the bank account every time,” Arjun Vijay, co-founder of Chennai-based Giottus, a cryptocurrency exchange, told Mint.

However, post the lifting of the RBI’s banking ban on cryptocurrencies by India’s Supreme Court in March this year, rupee-to-crypto transactions in crypto exchange platforms have spiked again, and are currently almost the same as volume traded in stable coins. You can read the full story here.